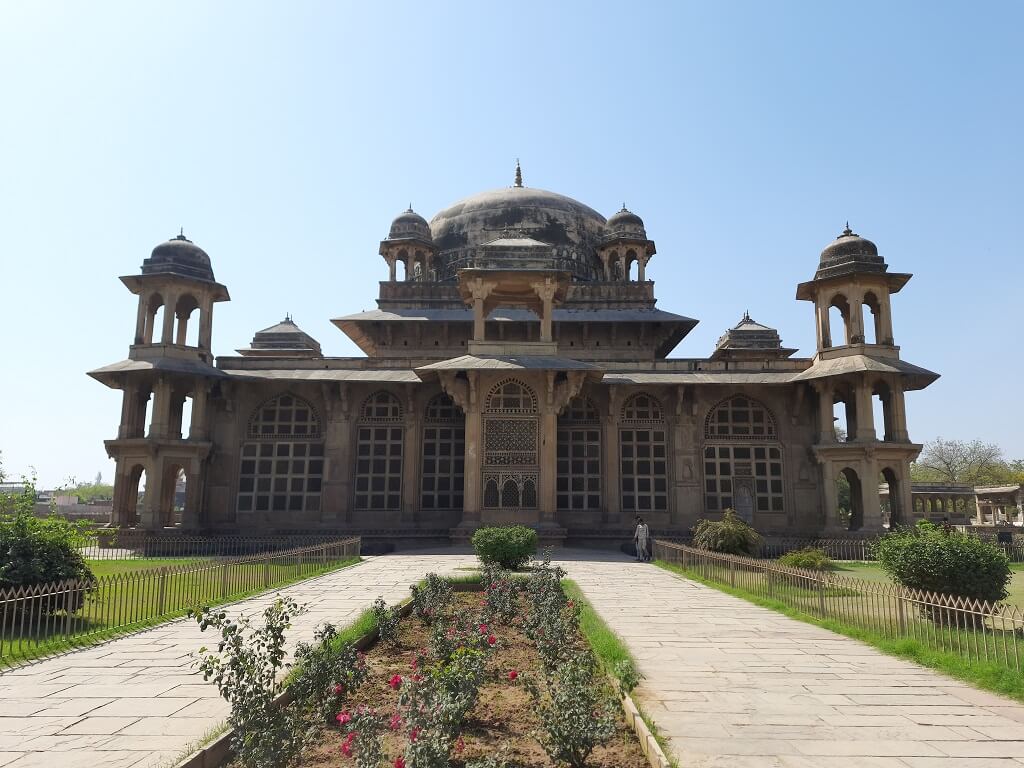 Talking about the legacy of Tansen, there are many buildings and monuments that are being built as the memorial of Tansen and one of those is “Tomb of Tansen”.

Located in the domain of The “Tomb of Mohammad Ghaus” because he wanted to get buried near his teacher, tomb of Tansen was constructed in 16th century A.D in a typical Mughal architectural style.

For all the lovers of music and even for those who have keen interest in the history, tomb of Tansen is of voracious captivation.  Well there are many reasons to visit this beautiful Tomb of Tansen which is not only full of history but also very attractive in its architecture.

Every year in the month of November a very famous event called Tansen Music festival is arranged at the Tomb of Tansen. This tomb is categorised into the living cultural heritages of Gwalior as well.

Tomb of Tansen in Gwalior 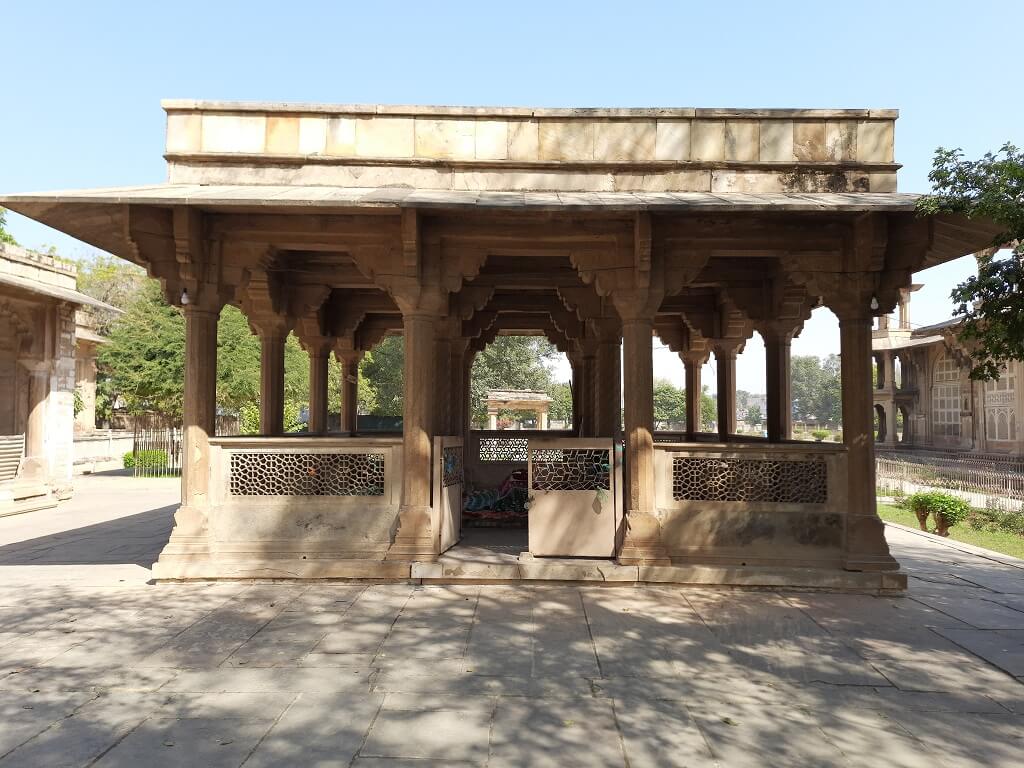 The place where he was buried is a very simple memorial built of sandstones. Visitors often mistook memorial of Muhammad Ghaus to the Tomb of Tansen. Muhammad Ghaus memorial is bigger and the inner carvings are very beautiful.

This tomb of Tansen is not maintained well; since the entry is free anyone can come and do whatever they wanted to do. Tansen was not only the gem of Mughal Emperor Akbar’s court but he was an also a pride of our country India so that place should be respected and maintained. There is a big lawn in front of the memorial, where can one see people relaxing and lying down on the grass.

The famous Tamarind tree in the premises of Tomb of Tansen 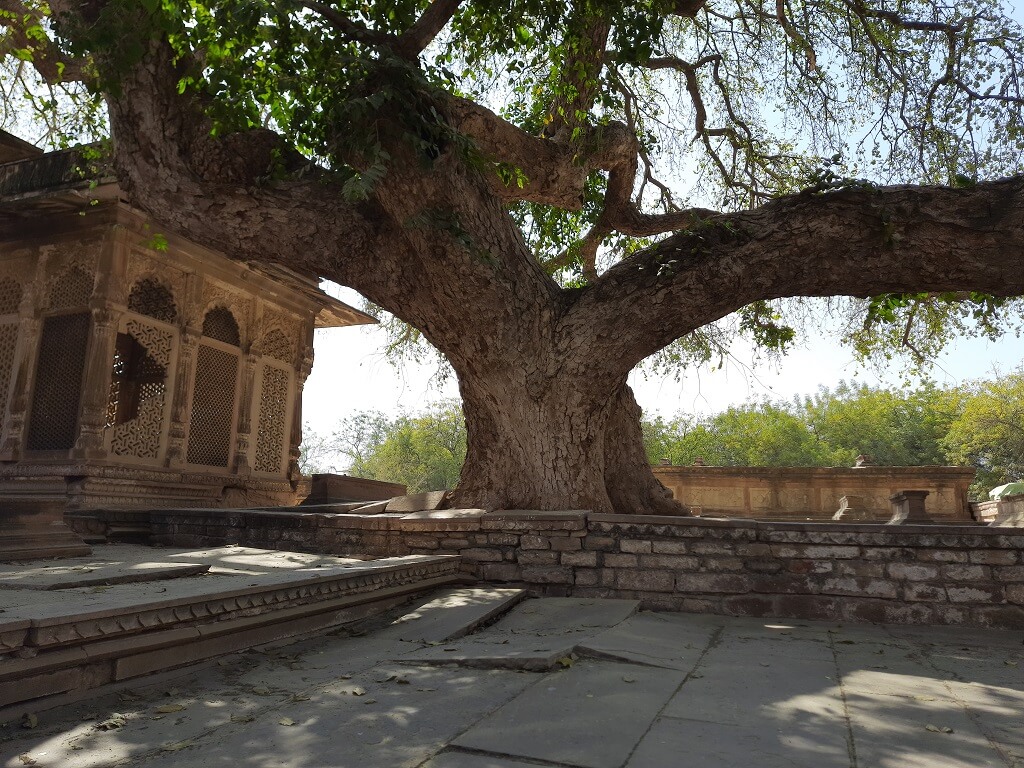 Tansen was a man with sensational and astonishing music skills and if there is anything that is related to someone like him should be kept properly as a memorial.

Tomb of Tansen is a place which is of utmost importance to the history and we all should visit such places more often to relish them. So next time when you are in Gwalior or if you will visit Gwalior don’t forget to pay a visit to the beautiful Tomb of Tansen and of Muhammad Ghaus. 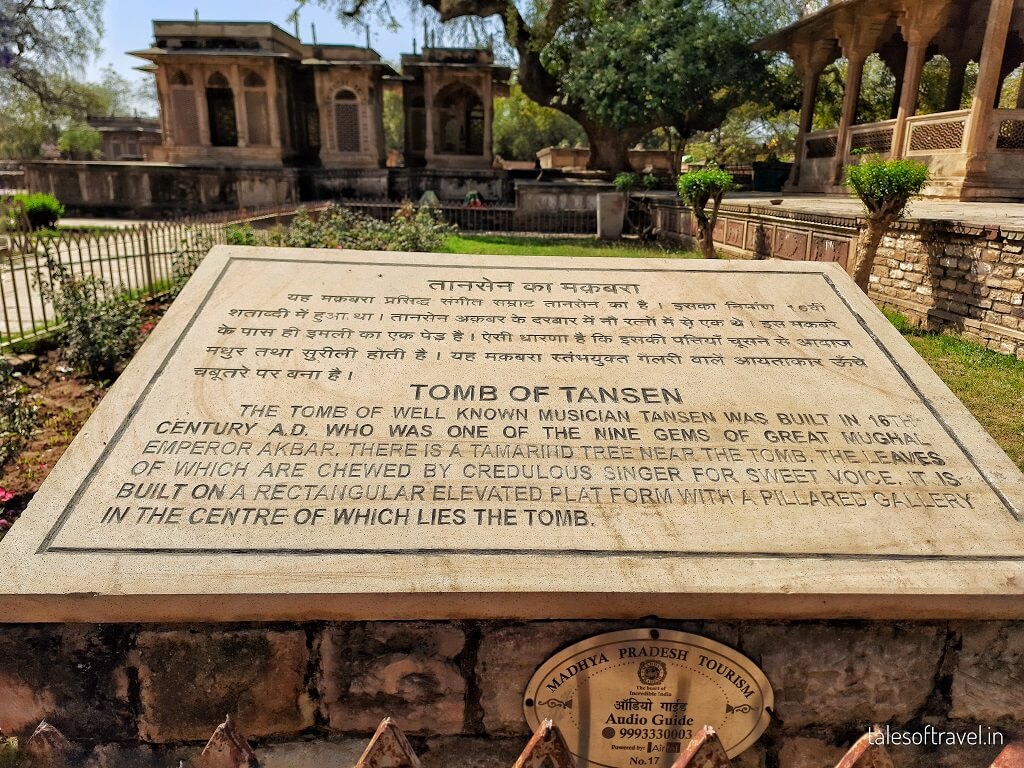 Born in 1506 in Gwalior Madhya Pradesh, Tansen was a vocalist, instrumentalist, and music composer. Musicians know about the famous ragas that were created by Tansen himself. And even today many musicians try their best to learn those ragas.

Court of King Ram Chand of Rewa State was the first place where he officially started singing during his earlier days. Due to his extra ordinary talent, Emperor Akbar appointed him as his own musician.

Mughal Emperor Akbar appointed Tansen as one of the Navaratnas (Nine Gems) in his court. Many things, events, tragedies have been associated with Tansen’s life. Not only musicians but even a person who doesn’t know anything about music is aware of his potential to create rain and fire by just using his musical skills.

Born to a wealthy parent and to a poet named Mukund Mishra, Tansen was born in Gwalior. Ramtanu was the earliest name that was given to Tansen during the time of his birth.

His father called him ‘Tansen’ from the early childhood of Tansen.  A legendary musician Swami Haridas once eye spotted Tansen who was taking out voice of tiger. He observed the music skills of Tansen and asked him to become his follower.

Tansen’s journey of music started at a very young age. For around 10 years Swami Haridas taught music to Tansen. He had a very impressive impact on Tansen.

Swami Haridas has an expertise in the style of Dhrupad so since Tansen spent valuable 10 years of his life under Swami Haridas. He also became the best musician who learned Dhrupad style. All these were in Hindu versions.

Talking about Sufi Muslim mystics, Muhammad Ghaus had an impactful impression in the story of Tansen.  Under the guidance of Muhammad Ghaus, Tansen developed the Gwalior Gharana style of music as well. A very important lesson that everyone should learn from Tansen is that he never discriminated between the two prominent religions.

He was very keen to learn so he just focused to learn as much as he could from both the gurus. At the generous age of 6 years only the legendary Tansen started singing.

Talking about the marriage of Tansen, he married one Hussaini, and has 4 sons and 1 daughter through this marriage. All the five children of Tansen became notable musicians. One legend also stated Akbar’s daughter Mehrunissa has also been married to Tansen.

Legendary singer Tansen was so good that everyone who listened to him talked about him. Mughal Emperor Akbar shortly started finding spectacular Indian musician and then he was chosen as one of the nine gems of his court. And after that, Tansen became his favourite singer.

Impressed by his extraordinary talent Akbar once gifted one lakh gold coins to Tansen on his first performance. Many philosophers, and in many books there is a special mention of Akbar’s admiration for Tansen.

Since Tansen was among the favourites of Akbar other servants got jealous of him and started hating him. Tansen, after becoming part of Navratnas known as “Miyan Tansen”. This name was given by Emperor Akbar himself.

Many Bollywood films have been directed  which were based on the life/story of Tansen. Like Tansen (1943), Tansen (1958) and Sangeet Samrat Tansen (1962). In one of the historical movie centre character was of Tansen name Baiju Bawra (1952),

Not only in Bollywood but also in Pakistan Television’s series in the late 1980s, Tansen became a part.

In the month of November and December, there is an organisation of an event named as “Tansen Samaroh”. Also awards like “The Tansen Samman” are given to some very talented ones who are expert in Hindustani Classical music.