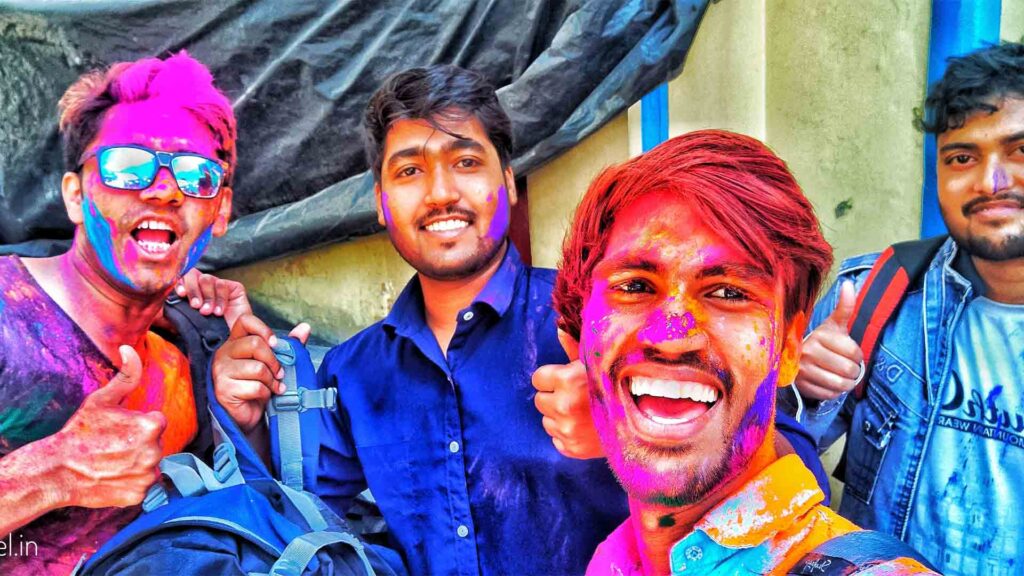 The most awaited festival of India, Holi is coming. I know we all had a great childhood experience at this festival of colors whose memories can not be forgotten.

I remember my mom used to save old clothes so that we all siblings can wear them in order to celebrate Holi, varieties of foods were made, all my friends were ready to fire with colors on each other, some of them were busy with a low budget surgical strike with balloons.

But, time flies and we all grew up, now days are not the same as before. Friends who once enjoyed every festival together, today they are busy with work and family.

Holi has always been a wonderful festival for everyone, it is the festival that shows winter has gone and spring has come. This is a festival in which it is not at all unusual to be angry if anyone puts color on you, at last, you will end up hearing “Bura Na Mano Holi Hai”.

I know you all are missing those memorable moments of your childhood. You have two choices, either you cry and feel sad about it or if you want you can build some new memories of this festival.

Thinking how you are gonna do it?

Well don’t worry, I will show you guys a very unique and adventurous way to celebrate Holi. But, before that let us understand some legends behind this festival of colors because it is also important to know about our cultures and fundamentals.

Why we celebrate Holi?

The legend of Holi is in such a way that, ones there was a demon king named Hiranyakashipu, who got a blessing from Lord Brahma.

The blessing was, he can be killed neither by a human being nor an animal, neither indoors nor outdoors, neither at day nor at night, neither by astra (projectile weapons) nor by any shastra (handheld weapons), and neither on land nor in water or air.

After getting such blessings from Lord Brahma, Hiranyakashipu became so arrogant and started commanding his people to worship him rather than any gods.

But, the problem started when his own son Prahlada, who was a true devotee of Lord Vishnu never stopped worshipping Vishnu and ignored his father Hiranyakashipu.

This boiled the blood of Hiranyakashipu and decided to kill his own son. He tried many ways to kill Prahlada, but the child always survived from all the traps.

Later Hiranyakashipu asked his sister Holika to kill his son. Holika sat in burning fire with Prahlad, she herself sat in a blanket so that she could escape from the fire. When the fire started burning, the blanket flew over Prahlad. He was saved and Holika Burned into ashes.

Lord Vishnu took the form of Narasimha, who was half-human and a half lion to kill Hiranyakashipu.

That is the reason Holika bonfire is set one day before Holi to burn demon Holika signifies that goodness always wins.

Why using color to celebrate Holi?

Using of colors to celebrate Holi came from the love story of Krishna and Radha.

Krishna was born with a darker skin complexion and Radha was of very fair skin complexion. This created an inferiority complex in the mind of Krishan due to which he didn’t take any step to have a talk with her.

One day Krishna told his problem to his mother, she laughed and advised him to put a color on Radha so that they both look the same in color.

After listening to his mother Krishna put color on Radha and from that day Holi is celebrated with colors. That is why Holi is also called the festival of Love.

Since then Holi became a national festival and celebrated throughout the country. Now Holi became popular in other parts of the world too.

Where to celebrate Holi? 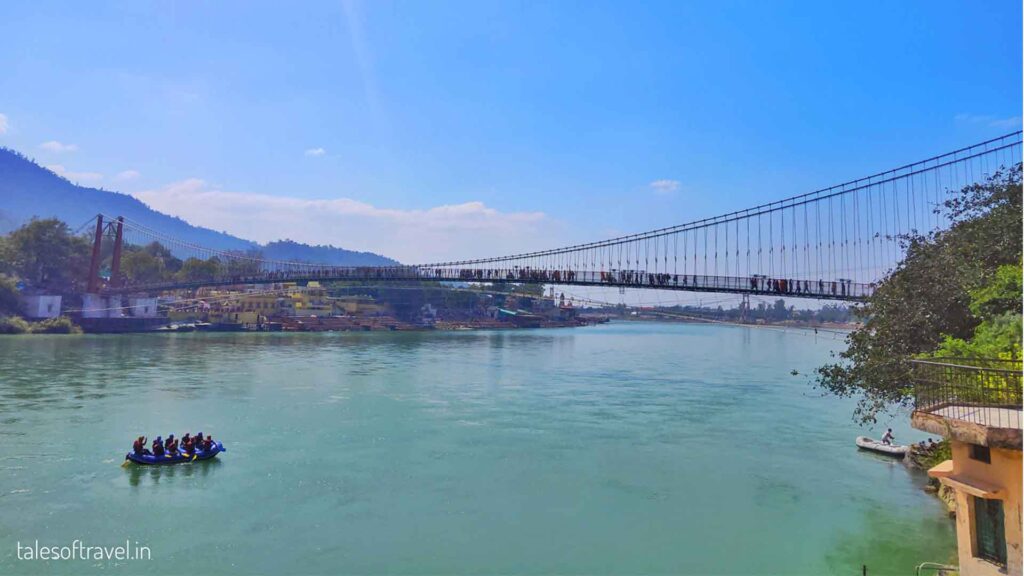 Well there many famous places to celebrate Holi in India and some of them are actually very astounding like Vrindavan, Mathura, and Varanasi. But, we are youngsters and we like some adventures, right?

So, according to me, you guys should consider visiting Rishikesh in the state of Uttarakhand to celebrate your Holi.

The reason why I am recommending this place because, last year I was so alone in my college room, without any friends and family I was literally crying and wanted to be happy at least at some ancient festivals.

In search of happiness, I took an overnight train from Jalandhar to Rishikesh to celebrate my Holi and I am very glad that I chose that city.

How you can celebrate Holi in Rishikesh?

Okay! so here is what you need to do.

Try reaching Rishikesh one day before the Holi festival. You can reach it by Airplane, but the nearest airport is Dehradun. The train is a much better option, you will get direct trains from nearly all the Metropolitan city up to Haridwar.

Although Rishikesh has its own Railway station, sometimes it is not functioning, so to be on the safe side, book up to Haridwar. From Haridwar, you will get direct buses to Rishikesh. 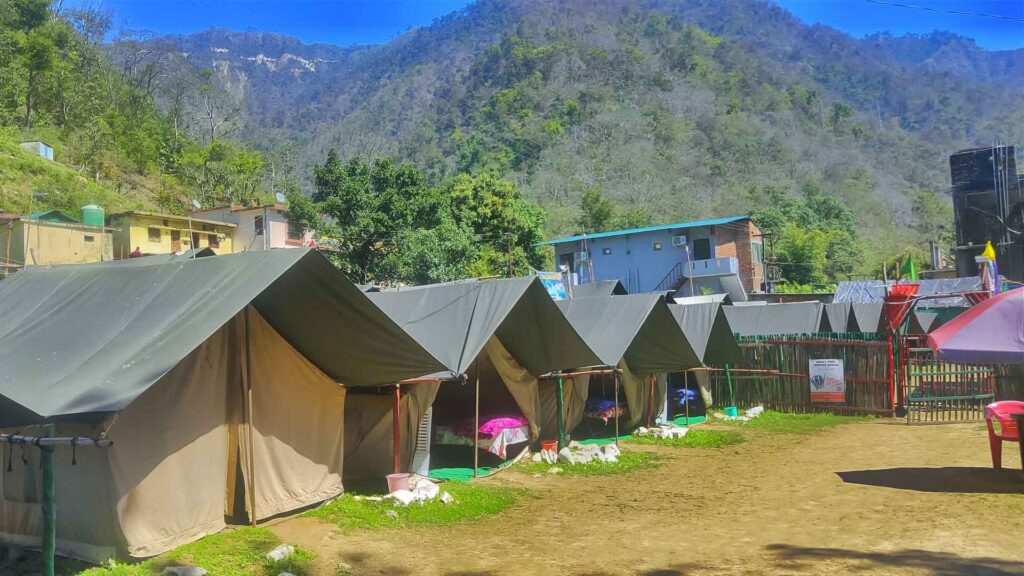 When you have reached Rishikesh one day before the actual festival, don’t even try to book a luxurious hotel or any kind of hotel at all, as it would take away all the fun of adventure you are gonna experience ahead in the city.

Camping is the best option for your stay, if you have your own gears then its cool, but if you don’t have any gears and your budget is tight then book a tent.

There are countless departments in Rishikesh that are always ready to give their camping services and help you to book a one night tent for your self.

Don’t worry about the prices as it would not cost more than Rs 2000 for one night stay on the banks of the river Ganges.

Not only this but other exciting things included in your bookings as well, one night stay on the river banks, buffet for dinner as well as breakfast, and the most important 16 km of rafting.

Organizers of the camps arrange bonfires for the people, so don’t forget to meet your fellow travelers and be friends with them.

Now it’s time to enjoy the enthralling experience of Holi of Rishikesh.

To experience it, head to Lakshman Jhula (bridge), you can go with your friends that you made at the camping site or if you are an introvert like me then prefer going solo.

You will start hearing high-volume music, shouting of peoples, and crowds are gathering just before the Lakshman Jhula entrance from a very far distance.

When you will reach the crowd you see will people are jumping, dancing, singing, and throwing colors on each other. It’s your time to join them with such crazy strange people and enjoy your festival.

This is the most enchanting experience that I have ever experienced, thousands of men and women completely strangers to each other enjoying together and celebrating Holi without bothering about caste, creed, race, background.

Clean yourself physically and mentally 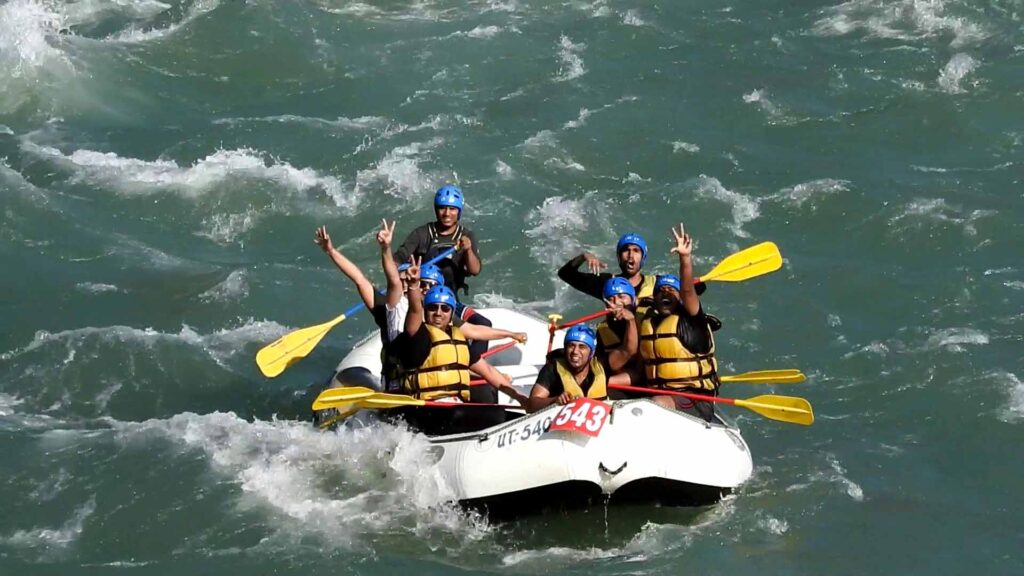 This is my favorite part of the whole journey to Rishikesh, and I am very confident that you guys will too love this step.

Your playing with colors may end between 1 PM and 2 PM. After enjoying with varieties of colors to celebrate Holi, it’s time that you should clean yourself physically as well as mentally.

So, what would you do next? take a bath?

Well, I would not recommend that, because what would be an adventure in that?

As you have booked your tent in which the river rafting package is also included, then you should consider doing that for the cleansing of your overall body.

16 Km of river rafting would be enough to clean yourself from the colors radiating from your clothes and body.

River rafting is something that each and every one of us should consider doing it. Rishikesh is also the best site in India for river rafting and other water sports activities so missing this opportunity is not recommended.

Not every one of us is lucky to have good friends in our life. We miss our nostalgic movements of childhood at each and every festival.

It doesn’t mean you can not celebrate Holi and make memorable movements again, I have presented all the important steps to plan your journey and celebrate Holi in the Yoga capital of the world Rishikesh.

The Ganges river is the pure and sacred river of India, not everyone is privileged to take a dip into this holy water, and you guys are so lucky that you are not only taking a dip rather you are performing various water sports activities like river rafting, cliff, jumping and surfing.

So, this coming Holi, don’t worry if you are lonely, Just follow the steps and make your festival memorable.

Top 5 holy ghats of Varanasi you should consider visiting

wondering how to spend a day in Kolkata?